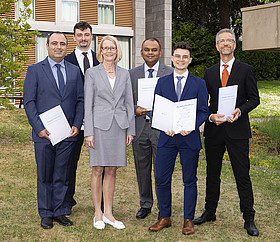 Precision spectroscopy for the fundamental questions of physics
Physicists seek answers to a number of fundamental questions: Are natural constants really constant? Is nature governed by four and only four forces? What is dark matter? Researchers hope to find the answers by studying simple quantum systems very meticulously. In recent years, a new family of such quantum systems has attracted particular attention: molecular hydrogen ions, the simplest of all molecules. One member of this family is the molecular ion HD+, which consists of one proton and one deuteron bonded by a single electron. As such, this is a very simple molecule that can on the one hand be used as a model system for more complex molecules and on the other serve as a convenient system for conducting fundamental research into the properties and interactions of the electron, the proton and the deuteron. Using this molecule, the Helmholtz Prize winners at the Heinrich Heine University Düsseldorf have developed and tested an innovative high-precision spectroscopy technique that can now be applied to other molecular ions. They further succeeded in enhancing the precision of some aspects of fundamental physics.

One characteristic shared by the vast majority of molecular ions is that cooling them directly with laser light is a complex and costly undertaking. But overcoming this challenge is well worth the effort because the precision spectroscopy of molecular ions promises to deliver insights that complement our knowledge of atoms and neutral molecules. In the early 2000s, researchers at Heinrich Heine University were the first to venture into this area of research. Their approach is to capture two ensembles of different ion types – one consisting of molecular ions and one of atomic ions – in a single ion trap. Here, the atomic ions are cooled by laser (as is done in optical atomic clocks and trapped-ion-based quantum computers) and they, in turn, cool the molecular ions through electrical interaction. This cooling dramatically slows the motion of the molecular ions, allowing their properties to be characterized with high accuracy.

Applying this method in its prize-winning work, the research group was able to make progress on four key fronts. First, they determined with unprecedented accuracy a combination of proton, deuteron, and electron masses (a combination of three fundamental constants). Second, they demonstrated a low-energy quantum physics test involving baryon motion that is ten times more accurate than previous tests. The group’s third achievement was to improve the bounds on the strength of a hypothetical fifth force between the proton and the deuteron. Finally, the group became the first to demonstrate a Doppler-free molecular electric quadrupole transition, attaining a line quality factor 40,000 times higher than previously achieved for molecular ions.