Dr.-Ing. Werner Farr for his work "A rubidium magnetometer to measure magnetic field strengths over a wide range and with high sensitivity" 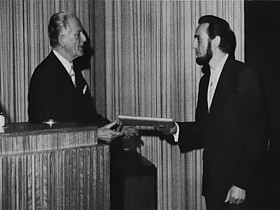 Werner Farr, who has born in Pforzheim in 1939, studied electrical engineering in Karlsruhe. After obtaining his German "Diplom" degree in engineering, he went to the University of Heidelberg, where he took on the leadership of the Electronics Laboratory at the 1st Physical Institute (1. Physikalisches Institut).

His expertly led laboratory enabled Heidelberg's nuclear and particle physicists to equip large experiments, for example at CERN and at DESY, with the most modern, custom-developed electronics. At the suggestion of Ernst Otten, Werner Farr developed the rubidium magnetometer for which he obtained his doctorate in Karlsruhe. For this work, Werner Farr was recommended by Ernst Otten for the Helmholtz Prize.

After 1983, Werner Farr moved to the USA where he held a leading position at the LeCroy Research Systems Cooperation (near New York) which had specialized in the manufacturing of instruments and components for high-energy physics experiments. Starting in 1996, he was an independent advisor for research and development. He has been retired since 2004 and now lives in Hawaii.

The Helmholtz Prize was first established in 1973, on the occasion of the 60th anniversary of the Helmholtz Fund. The prize was to be awarded for a work of "research and development in the field of precision measurement of physical quantities".

The first prize, which was endowed with 5,000 German marks, was awarded to the electrical engineer and physicist Dr.-Ing. Werner Farr in 1974 for his work titled "A rubidium magnetometer to measure magnetic field strengths over a wide range and with high sensitivity". Within the scope of his doctoral dissertation, for which he was mentored by Ernst Otten at the "1st Physical Institute" of the University of Heidelberg (1. Physikalisches Institut der Universität Heidelberg), he had developed a miniaturized precision magnetometer that worked according to the optical pumping principle.

The core piece of this magnetometer was a probe with a 0.09 cm3 glass cell filled with gaseous rubidium. After this cell had been brought into the magnetic field to be measured, it was irradiated via a glass fibre with the light of a rubidium spectrum lamp that had been circularly polarized. Due to the intensive light, the rubidium atoms in the cell were repeatedly brought from the ground state 2S1/2 into the excited state 2P1/2, from which they returned to the ground state due to fluorescence. Due to the selection rules for electric dipole radiation, the hyperfine state was, depending on the polarization direction of the light, ever more strongly occupied by electrons (F  = 2 and mF  = +2 and ‑2, respectively) whereas the other sublevels became emptied. This optical pumping caused a strong magnetic polarization of the atoms. The degree of polarization could be determined via the intensity of the light the cell let pass. By means of a small coil which was wound around the glass cell, the atoms were exposed to a radio frequency signal which excited them resonantly to transitions between states of different mF. This destroyed the polarization, which, in turn, led to a change in the light intensity measured. The radio frequency was generated by an electronic oscillator and tuned to the resonance.

Based on the computed magnetic field dependence of the resonance frequency, it was then possible to determine the magnetic field strength. This magnetometer allowed field strengths from 10–7 teslas to 10–1 teslas to be measured and stabilized point by point. These measurements reached an accuracy of 10–9 teslas. The small probe volume allowed magnetic fields to be detected in the air gap of ferrous magnets.

Werner Farr and Ernst Otten filed a patent for the magnetometer. This patent was taken over by Bruker Physik AG in Karlsruhe, which produced and commercialized the device. Today, optically pumped magnetometers are used in fields such as archaeology.