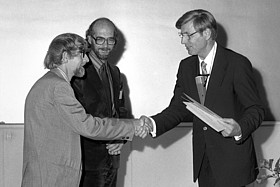 David Knight was born in Bude, Cornwall in 1937. He studied physics at Oxford, where he gained his PhD in the Engineering Department in 1965. In 1966 he joined NPL’s Division of Quantum Metrology in Teddington, and he was made head of the Time and Frequency Department in 1987. After retiring in 1994, he was a consultant for NPL. He died in 2017.

Gordon Edwards was born in 1941, studied physics at Cambridge from 1961 to 1964 and was awarded his DPhil from the University of Sussex in 1969. He joined the Division of Quantum Metrology at NPL in 1970 to work on the measurement of the speed of light. It was here that he performed precision measurements of laser frequencies. After that, he dedicated himself to the application of lasers for temperature measurements. In 2001 he retired, but he still holds a part-time position at NPL.

Nigel Cross was born in Isleworth, Middlesex in 1946 and started an apprenticeship at NPL in 1962. In 1971 he gained an Honours Degree in Mechanical Engineering from the University of Surrey. He developed detectors for the Joint European Torus in Culham, UK and for ESA. Since retiring in 2006, he has been a consultant for NPL.

The fourth Helmholtz Prize, which was awarded in 1980, was a special prize. It was awarded on the occasion of the Conference on Precision Electromagnetic Measurements (CPEM 80) which took place in Braunschweig in that year and was to go to the best work presented at this event. This prize, which was worth 5,000 German marks, was awarded to four English physicists Dr. David J. E. Knight, Dr. Gordon J. Edwards, Peter R. Pearce and Nigel R. Cross, who worked at the National Physical Laboratory (NPL) in Teddington, England. In their lecture titled “A ± 3 parts in 1011 measurement of the frequency of the methane-stabilized, helium-neon laser at 88 THz”, they reported on how they had determined the frequency of an He-Ne laser, which had been stabilized using an absorption line of methane at a wavelength of 3.39 µm, with an accuracy of 2 kHz that had not been attained before.

At the National Bureau of Standards in Boulder, USA, the speed of light had been determined with an accuracy of 1 m/s in 1972 by measuring the wavelength and the frequency of a methane-stabilized He-Ne laser at 3.39 µm. The redefinition of the metre in 1983 was based on this; it stated that a metre was the length of the path travelled by light in vacuum during a time interval of 1/299 792 458 of a second. The work of Knight and his colleagues was part of the effort put into preparing for the later redefinition of the metre by measuring the frequency and wavelength of the He-Ne laser as precisely as possible.