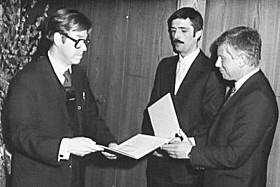 Fritz Riehle (2nd from left), who was born in Zell am Harmersbach in 1951, studied physics in Karlsruhe where he obtained his doctoral degree in 1977 and also habilitated in 1981. In 1982, he went to PTB Berlin where he took on the leadership of the "Fundamental Radiometry" working group until 1987 in PTB's laboratory at BESSY. In 1987, he went to PTB Braunschweig where he was the head of the "Unit of Length" laboratory. Until his retirement in 2016, he was the head of PTB's "Optics" division. The University of Hannover named him as an honorary professor in 2011. He became a Fellow of the American Physical Society in 2013. He received the Helmholtz Prize for the second time in 1999.

Burkhard Wende (at right) was born in Berlin in 1937. He studied physics at TU Berlin and joined PTB Berlin in 1963 after obtaining his German "Diplom" degree. Additionally, he obtained his doctoral degree in 1966 from TU Karlsruhe where he also habilitated and became a lecturer in 1970. Starting in 1974, he led the "High Temperature and Vacuum Physics" group. In 1977, he was called to a professorship in Karlsruhe and later became an honorary professor at TU Berlin. Starting in 1995, he led the "Temperature and Synchrotron Radiation" Department at PTB Berlin, and from 1998 until his retirement in 2002, he was the head of PTB Berlin. His efforts were crucial for the conception and building of the BESSY I and BESSY II electron storage rings, and he initiated the construction of PTB's Metrology Light Source.

On the occasion of the 100th anniversary of PTR/PTB, the 1987 Helmholtz Prize was awarded in three different subject areas. In the field of “Precision Measurement of Physical Quantities”, Dr. Fritz Riehle and Prof. Dr. Burkhard Wende of PTB Berlin were awarded the prize for their work titled “Ein Elektronenspeicherring als primäres Strahlungsnormal zur Realisierung strahlungsoptischer Einheiten” (An electron storage ring as primary radiation standard for the realization of radiation-optical units).

When Max Planck drew up his famous radiation formula in 1900, he could refer to the precise measurements of the cavity radiation that had been carried out at PTR in Berlin. Based on Planck's radiation formula, high-temperature cavity radiators were used first as primary radiation standards for the realization of spectral radiant powers. However, for short wavelengths below 250 nanometres, the emission of these radiators is too weak to be used for a radiation standard. In contrast to this, electron storage rings emit intensive synchrotron radiation from the visible spectral range to the X-ray range. The spectral distribution of this radiation only depends on a few parameters and is given by a formula which was derived by Julian Schwinger in 1949 for the radiation emission of radially accelerated relativistic electrons from the laws of classical electrodynamics.

By reducing the number of electrons stored in BESSY I to one electron, the radiant intensity could be modified by up to 12 orders of magnitude. Until its decommissioning in 1999, the storage ring standard had been used for the calibration of detector and source working standards from the near IR to the range of soft X-rays. Since January 1999, PTB has been using the electron storage ring BESSY II as a primary radiation standard, especially from the vacuum UV to the X-ray range. With the Metrology Light Source (MLS), a primary radiation standard for spectral ranges from IR to the extreme UV has been available to PTB in addition to BESSY II since spring 2008.