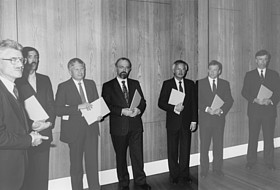 Sergio Nicola Erné (left), who was born in Venice in 1944, studied physics at the University of Padua, where he also obtained his doctoral degree in 1969. In 1972, he went to PTB (Berlin site) where he led the Laboratory for Biomagnetism from 1987 to 1992. Until 2005, he headed the Biosignals and Imaging Technologies Division in the ZIBMT at the University of Ulm and was co-director of the Istituto di Tecnologie Avanzate Biomediche at the University of Chieti in Italy. From 2006 until 2009, he led the "Biosignals and Imaging Technologies" department of the Neurologisches Klinikum at Jena University Hospital. From 2006 until 2015, he was the technical manager and managing partner of BMDSys Production GmbH in Günzburg, which develops systems for the clinical application of magnetic field imaging, especially for cardiology.

Manfried Hoke (right) was born in Meißen in 1933. He studied physics and medicine in Jena and continued his studies in medicine in Hamburg. There, he obtained his doctoral degree in medicine in 1960. In 1963, he went to the University of Münster, where he was habilitated in 1973 and where he was appointed to a professorship in 1977. Starting in 1986, he led the Institute for Experimental Audiology at the Ears-Nose-Throat Clinic of the University of Münster. He retired in 1998 and died in 2006.

In 1987, the Helmholtz Prize was awarded for the first time for work in the field of "Physical Metrology in Medicine, Radiation Protection and Environmental Protection". The prizewinners were Dr. Sergio N. Erné from PTB Berlin and Prof. Dr. Manfried Hoke from the University of Münster for their work "Acoustically evoked brainstem magnetic fields triggered by means of short tone burst stimulation" (Auditorisch evozierte Hirnstamm-Magnetfelder, ausgelöst durch Stimulation mit kurzen Tonimpulsen). They had succeeded in measuring magnetic fields of only a few femtoteslas (10‑15 T) which had been generated in the brainstem by acoustic excitation. These were the weakest biomagnetic signals ever measured until then.

The electrical activities of cells and organs of the human body generate magnetic fields. Detecting such magnetic fields allows contact-free insight into the body. This is particularly interesting for neurology, which is thus provided with a diagnostic means to investigate epilepsy, for example. In the mid-1980s, US-American researchers tried – however in vain – to measure magnetic fields triggered in the brainstem by acoustic stimulation. These magnetic fields turned out to be so weak that they could only be measured by means of extremely sensitive SQUID magnetometers and after all magnetic interferences had been suppressed using sophisticated shielding techniques.

At PTB in Berlin, Sergio Erné and his team had set up a magnetic shielding chamber and an exceptionally sensitive magnetometer which he and Manfried Hoke used for their measurements carried out on test persons. The test persons were otologically normal young women who sat in the shielded chamber. A sequence of electric pulses of approx. 4 ms length and with a frequency of 1 kHz was sent to headphones that were located outside the chamber. The acoustic signals generated by these headphones were fed into the chamber via a plastic tube so that the test persons could hear them. The component of the magnetic field evoked in the brain, which was positioned vertically to the skull of the respective test person, was recorded by means of a SQUID magnetometer at defined points at the surface of the head, in the parieto-occipital region.

Conventional electric measurements of the acoustically generated brainstem potentials were carried out at the same time as the magnetic measurements. After filtering and digitizing the recorded signals, it turned out that the magnetic signals coincided perfectly in time with certain components of the acoustically evoked brainstem potentials. The researchers had thus succeeded in observing, with spatial resolution, processes taking place inside the brainstem by means of magnetic fields.

In the following years, magnetoencephalography evolved enormously – to which Manfried Hoke considerably contributed. For example, this technique allows brain areas that are responsible for triggering epileptic seizures to be located. Sergio Erné investigated, among other things, the magnetic signals of the peripheric neurologic system. In addition, he conducted research on the possibilities of imaging magnetic fields, for instance to examine the human heart while beating. Also, he developed the corresponding instruments and brought them to maturity for use in hospitals.