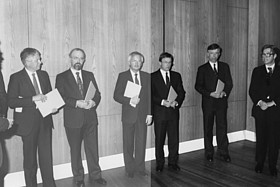 Hans Förster was born in Freiwaldau in 1944. He studied physics in Freiburg and Bielefeld before obtaining his doctoral degree in Freiburg in 1976. He went to PTB Braunschweig in 1979 and worked in a group which was led by Henrikus Steen. Later, he took on the "Explosion Dynamics" laboratory and led it until his retirement in 2009.

Henrikus Steen, who was born in Osteel (East Frisia) in 1938, studied mechanical engineering (heat and procedural technology) in Braunschweig and obtained his doctoral degree in Aachen in 1973. He joined PTB Braunschweig in 1965 and became the head of the "Fundamentals of Explosion Protection" working group in 1980. In 1990, he went to the BAM Federal Institute for Materials Research and Testing in Berlin, where he was the head of the "Chemical Safety Technology" department. He retired in 1995.

In 1987, the Helmholtz Prize was awarded for the first time for work in the field of "Physical Safety Engineering": Dr. Hans Förster and Dr. Henrikus Steen, both from PTB Braunschweig, received the award for their work "Investigations on the dynamics of turbulent gas explosions". A gaseous mixture of fuel and air which ignites, explodes much more violently when it flows turbulently than when it is at rest or flows laminarly.

These types of turbulence may occur, for example, where the mixture in a pipe flows through a constriction or escapes through a leak. Investigations of explosions have shown that the combustion rate at which the combustion progresses in the mixture is much higher in the turbulent case than in the laminar case. Dr. Förster and Dr. Steen investigated how explosions occur in turbulent mixtures and how they are influenced by the characteristic macroscopic length scales of the turbulence. These investigations were carried out at PTB by means of explosion experiments.

Dr. Förster and Dr. Steen worked with stoichiometric mixtures of propane gas and air which were blown through nozzles into a closed cylindrical vessel with a volume of 1.5 m3 or 0.055 m3. Four electric fans on the inner wall of the vessel made the mixture turbulent. The mixture was ignited by an electric spark in the centre of the vessel. A high-speed camera monitored the flame propagation through a viewing window, while the temporal development of the explosion pressure was measured at the wall of the vessel. The optically determined flame velocity agreed well with the velocity calculated from the pressure curve. According to these findings, the explosion took place in two phases. Initially, the turbulent flame velocity uT was not significantly higher than the laminar flame velocity uL measured in earlier experiments. But after a few tens of milliseconds the explosion accelerated, and uT reached six times the speed of uL in the larger vessel, and still four times the speed in the smaller vessel. The decisive factor for uT in this process was the average size L of the eddies occurring in the turbulent flow. The larger the vessel, the larger and stronger the eddies which accelerated the flame propagation.

Dr. Förster and Dr. Steen demonstrated with these results that uT was, in good approximation, a function of the turbulent Reynolds number Re = u ∙ L/ν, with the mean turbulent velocity variation u and the viscosity ν. Accordingly, uT/uL = (1 + 0.012 ∙ Re) 0.5. Consequently, in addition to the velocity variation, the characteristic length scale L of the turbulence was a decisive factor for the turbulent flame velocity. The researchers deduced the following from this finding: "For safety-engineering assessments of flame accelerations, of pressure increase rates or of peak values in explosion pressure waves, the dimensions of the vessel and the size of the explosive mixture cloud must be taken into account." At that time, these results attracted great interest in the field of safety engineering.