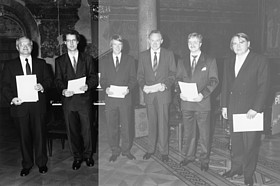 Manfred Klonz (l.) was born in Steinersdorf, Silesia in 1941 and studied high-frequency and communications technology at the Technische Hochschule (TH) Hannover (Hannover College of Technology). In 1967, he joined PTB Braunschweig, where he worked in the Laboratory for AC Voltage Standards until 1975. In 1987, he received his doctorate from TU Braunschweig. Until 1990, he worked in the Laboratory for Electricity Meters, after which he transferred to the Thermoelectric Sensors Group. From 1993-2003, he was the head of the Thermoelectric Sensors Group, which was later renamed the AC/DC Transfer Group. Until his retirement in 2006, he was the head of the Direct Current and Low Frequency Department.

Thomas Weimann (r.) was born in Unna, Germany in 1961, studied physics in Münster and completed his Diplom degree studies in 1987 at PTB with a thesis supervised by Manfred Klonz. He remained at PTB and worked in the field of multi-junction thermal converters until 1990. He then expanded the field of electron beam lithography within PTB Braunschweig. In 1995, he completed his doctorate in Münster with a thesis on the planar multi-junction thermal converter. He is currently the head of the Nanostructuring and Clean Room Center Infrastructure Group.

The values of electrical DC voltages and resistances can be reproduced with a relative uncertainty of 10–9 by means of the Josephson and quantum Hall effects. For AC voltages and alternating currents (which are just as important in metrology), no precise realizations exist. For this reason, the alternating quantities are traced to equivalent direct quantities (AC/DC transfer) by comparing the temperature increase caused by an alternating current in a filament with the temperature increase caused by a direct current of a known rate.

For this task, thermal converters are used for which the temperature increase of the filament is measured by means of numerous series-connected thermocouples. Earlier customary thermal converters had a complicated three-dimensional structure. Because it was necessary to construct them by hand under a microscope, they were unsuitable for the mass production necessary to meet the demand of calibration services and national metrology institutes. On the other hand, at PTB, Manfred Klonz and Thomas Weimann developed a thermal converter that could be manufactured via thin-film techniques, as used in the semiconductor industry. For this work, they were awarded the 1990 Helmholtz Prize in the field of “Precision Measurement of Physical Quantities”; the prize at that time was endowed with 10,000 German marks.

The planar multi-junction thermal converter rested on a 2 x 3 mm2 silicon oxide window that was 3 µm thick; this window had been anisotropically etched into a 5 x 8 mm2 silicon chip. A heater and 108 thermocouples made of copper and constantan (a copper-nickel alloy) were deposited under vacuum onto the window. The current-carrying heater heated the window, which was a poor heat transmitter. The temperature increase caused in this way was measured by the thermocouples. It was possible to produce up to 100 thermal converters on one wafer at the same time. This allowed the new measuring element to be produced in large quantities and with high precision. Since the properties of the planar multi-junction thermal converter were calculated as a function of the size and shape of its components, it was possible to optimize them via computer simulation.

This has allowed PTB to reinforce its position as a leading institution in AC/DC transfer.