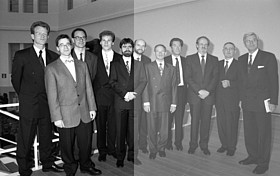 (From left to right) Thomas Andreae, who was born in Rüsselsheim in 1961, studied physics at TH Darmstadt and at the Ludwig Maximilians University in Munich, where he obtained his doctoral degree in 1993 under Theodor Hänsch. After holding various posts in the healthcare industry, including the Marketing Directorship for the field of medical technology at Philips Healthcare, he is now an independent consultant and entrepreneur in this field.

Dietrich Leibfried, who was born in Stuttgart in 1965, studied physics at the Ludwig Maximilians University in Munich and obtained his doctoral degree under T. Hänsch in 1995. Since 2001, he has been working at NIST in Boulder (USA), where he has been researching quantum information processing with trapped ions.

Wolfgang König also obtained his doctoral degree under T. Hänsch in 1993. Since 1996, he has been working in the field of "Computer-Implemented Inventions" at the European Patent Office in Munich.

Ferdinand Schmidt-Kaler was born in Bonn in 1962. He studied physics in Bochum, Bonn, and at TU Munich. In 1992, he obtained his doctoral degree under T. Hänsch before working as a postdoc with Serge Haroche in Paris until 1995. Starting in 2005, he was an experimental physics professor in Ulm. In 2010, he was called to a professorship at the University of Mainz, where he leads the "Cold Ion and Experimental Quantum Information" group.

Robert Wynands, who was born in Aachen in 1962, studied physics in Aachen and at Caltech. He obtained his doctoral degree in 1993 at the Ludwig Maximilians University in Munich under T. Hänsch. In 1998, he obtained his habilitation degree in Bonn and joined PTB Braunschweig in 2003, where he led the "Time Standards" working group from 2004 to 2009, following research stays at other organizations including NIST. Until 2015, he was the head of the Presidential Staff and from 2011 to 2015, he also coordinated the Helmholtz Prize. Since 2016, he has been the head of the "Velocity" department.

Of all the atoms, the hydrogen atom has the simplest structure as it only consists of one proton and one electron. Therefore, it is possible to calculate the atomic excitation frequencies of hydrogen within the scope of quantum electrodynamics with very high precision. A comparison of the theoretical results with the results of precision measurements makes it possible, on the one hand, to verify the theory and, on the other hand, to determine natural constants (e.g. the Rydberg constant) with high precision. Such a fundamental precision measurement was carried out by the graduate physicists Thomas Andreae, Wolfgang König and Dietrich Leibfried as well as Dr. Ferdinand Schmidt-Kaler and Dr. Robert Wynands at the Max Planck Institute of Quantum Optics in Garching (Germany). For their work, they were awarded the 1993 Helmholtz Prize in the field of "Precision Measurement of Physical Quantities".

The five scientists from a working group led by Theodor Hänsch measured the frequency f1S-2S of the transition from the ground state 1S to the metastable state 2S. This frequency, which is close to 2466 THz, can be determined very precisely, as the natural linewidth of the transition only amounts to 1.3 Hz. The measurement was carried out in three steps. First, the 1S-2S transition was induced with the aid of a frequency-doubled tunable dye laser via two-photon excitation. Then, the transition was probed by mixing the short-lived 2P state into the metastable 2S state via a weak electric field and by observing the spontaneous emission of the resonance line. Finally, the transition frequency was indirectly compared to that of a caesium standard. For this purpose, the researchers took advantage of the fact that the frequency f of a methane-stabilized helium-neon laser and the frequency f1S-2S are in a ratio of about 1: 28.

To measure f1S-2S, the 7th harmonic 7f was generated via a frequency chain. It was then compared to the frequency fL = 7f – Δf of the dye laser via a reference resonator which resonantly excited the 1S-2S transition after frequency doubling by means of a two-photon process: f1S-2S = 28f – 4Δf. By counting Δf, the frequency f1S-2S was finally determined: f1S-2S = 2 466 061 413.182(45) MHz with a relative uncertainty of

1.8 ∙ 10-11, which was 18 times smaller than the uncertainty of previous measurements.

With the aid of the quantum electrodynamics theory, other excitation frequencies of the hydrogen atom can also be derived from this transition frequency with a comparable precision and can be defined as secondary frequency standards. Furthermore, the prizewinners were able to determine an improved value for the Rydberg constant: R∞ = 109 737.315 684 1(42) cm-1. In 2011, researchers working with Theodor Hänsch measured the frequency of the 1S-2S transition with a relative uncertainty of 4.2 ∙ 10-15 using the frequency comb technology which had meanwhile been developed.