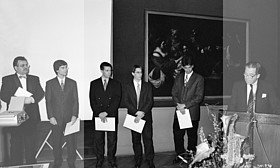 (From left to right) Aymeric Derville was an intern at the DLR Institute of Aerodynamics and Flow Technology in Göttingen within the scope of the IAESTE (International Association for the Exchange of Students for Technical Experience) programme.

Christian Willert, who was born in Mayen (Eifel) in 1964, studied engineering from 1987 to 1992 at the University of California in San Diego and obtained his doctoral degree there in 1992. From 1994 to 1997, he worked at the DLR Institute of Aerodynamics and Flow Technology in Göttingen. In 1998, he became a project leader at the DLR Institute of Propulsion Technology in Cologne. Since 2007, he has been the head of the "Engine Measurement Systems" department.

Jürgen Kompenhans (not pictured) was born in Eschwege in 1946. He studied physics in Göttingen and obtained his doctoral degree there in 1976. In 1977, he joined the DLR Institute of Aerodynamics and Flow Technology in Göttingen, where he led the Particle Image Velocimetry (PIV) group starting in 1985 and the "Experimental Methods" department from 2002 to 2011. He has been in retirement since 2011.

Velocity fields in flowing gases or liquids can be determined quickly and automatically. For this purpose, the images of tracer particles that have been taken at short intervals are evaluated by means of a computer. The applications of this method known as particle image velocimetry (PIV) range from aerodynamics to biology, from the study of turbulence in liquids to the investigation of combustion processes and microfluidics.

At first, it was possible to use PIV to determine only the two velocity components which lay in a two-dimensional light section that was generated twice in succession to illuminate the tracer particles. By means of an additional image of the particles which were in a second light section that was parallel to the first light section, it was also possible to determine the third velocity component perpendicular to the light section planes by means of a newly developed evaluation system. Dipl.-Ing. Aymeric Derville, Dr. Christian Willert, Dr. Markus Raffel and Dr. Jürgen Kompenhans from the former Deutsche Forschungsanstalt für Luft- und Raumfahrt (DFL) (German Institute for Aviation and Space Research) in Göttingen (today called "German Aerospace Center – DLR) developed these dual-plane PIVs. For their work, they were awarded the Helmholtz Prize in 1996 in the field of "Computer Science and Mathematics in Metrology".

The information about the particle velocities, which was contained in two consecutive images, was obtained by the researchers by investigating how the two images could best be matched locally by relative displacement. For this purpose, they calculated the local correlation of the brightness distributions in the two images for different displacement vectors. From the maximum of the correlation, they obtained the displacement vector. From this and from the time interval between the two images, they obtained the local particle velocity. When the images had been taken for the same light section, it was possible to determine the two speed components in the section plane. From the images for parallel light sections, the velocity component perpendicular to the section planes could be derived.

The researchers tested the reliability of their method by generating artificial particle images for a known flow field using Monte Carlo simulation and by then calculating – by approximation – the flow field from the images. After this, they used their method to evaluate experimental data. For this purpose, they placed silver-coated glass spheres with a diameter of 10 µm in a glass cylinder filled with glycerine. Since the lid of the cylinder rotated, the spheres moved with the glycerine, which was recorded by a CCD camera. Using a laser beam, the researchers generated a light section of 2 mm thickness through the cylinder. By means of the images of the light sections, the researchers were able to determine the radial, axial and azimuth velocity at any points in the section plane. The PIV method has meanwhile established itself as the most widely used optical measurement technique for measuring flow velocity in a plane or in a volume. The prizewinners have contributed significantly to this success.