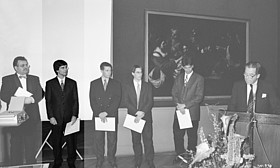 Werner Hemmert was born in Moosburg an der Isar in 1964. He studied electrical engineering and computer engineering at the Technical University of Munich. From 1991 to 1998, he was employed at the Tübingen Hearing Research Centre of the University of Tübingen, where he studied the micromechanics of the inner ear. For this research, he obtained his doctoral degree from the Ruhr University of Bochum in 1997. After research stays at the Massachusetts Institute of Technology (MIT, 1998-2000), the IBM Research Laboratories in Rüschlikon (2000-2001) and at Infineon (2001-2007), he was appointed as a professor for "BioInspired Information Processing" at the Technical University of Munich.

When we hear sounds, vibrations picked up at the eardrum generate a travelling wave in the fluid-filled inner ear (cochlea). This wave is amplified by motile sensory cells embedded in the organ of Corti. These sensory cells (called "outer hair cells") are suspended between two vibrating membranes – the basilar membrane and the tectorial membrane. The amplification process is based on a unique property of these cells: when they are excited by the travelling wave, they react with a rapid length-change of their cell body and couple energy back into the vibration. This process causes a frequency-specific amplification and sharpening of the travelling wave, which is then detected by the adjacent inner hair cells. They are contacted by the synapses of individual auditory nerve fibres, which convert sound into nerve impulses that are transmitted to the brain.

At the Hearing Research Laboratory of the University of Tübingen, Werner Hemmert investigated how this vibrating system, especially the tectorial membrane and the outer hair cells, moves. For this task, he developed a measurement set-up which could record the sound-induced vibrations optically in three dimensions. For his work, which was developed within the scope of his doctoral thesis, he was awarded the Helmholtz Prize in 1996 in the category "Physical Metrology in Medicine and Environmental Protection".

The three-dimensional vibration measurements were carried out under a microscope with the aid of a laser Doppler vibrometer and a photodiode system. Whereas the transversal vibration component was detected along the optical axis of the microscope with the laser beam of the vibrometer, the photodiode was sensitive to displacements in the plane vertical to the laser beam. To increase the sensitivity of the photodiode measurements, polystyrene microspheres were deposited onto the object under observation. Hemmert prepared the cochlea of a guinea pig in such a way that the organ of Corti with the sensory cells and the tectorial membrane was optically accessible. Sound stimulation in a frequency range from 50 Hz to 2 kHz was provided by a loudspeaker through the still intact middle ear.

Measurements of the transversal motion and of the radial motion component of the tectorial membrane elucidated how the micromechanics of the cochlea work. In the guinea pig's low-frequency hearing range, the vibration of the basilar membrane showed a maximum at the "best frequency", which was for example 735 Hz in one preparation. On the contrary, the radial component of the tectorial membrane showed a lower resonance at 470 Hz. This behaviour results from the complex micromechanics of the organ of Corti. Thus, the resonance at 470 Hz is caused by the mass of the tectorial membrane and the rigidity of the stereocilia of the outer hair cells. Based on his measurements, Hemmert assumed that the mass-controlled vibration of the tectorial membrane provides the correct phase conditions so that the contraction of the outer hair cells in the range below the best frequency couples energy into the travelling wave so that it propagates along the basilar membrane and amplifies the wave in this way.

Moreover, the findings by Hemmert allow us to better understand dysfunctions of hearing-impaired ears such as degradation in the case of noise-induced hearing loss. After a hearing impairment due to the loss of outer hair cells, basic hearing aids can amplify signals coupled into the ear such that hearing aid users can again detect soft sounds. From outside, however, the sharp frequency resolution of the travelling wave, as provided by healthy outer hair cells, cannot be restored. For that reason, most hearing-impaired subjects have a hard time extracting speech in noisy environments. Therefore, new-generation hearing aids are being designed which are taking over this task with growing success.