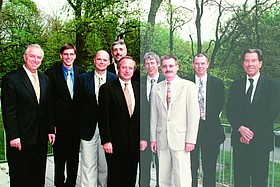 (From left to right) Jürgen Helmcke, who was born in Hannover in 1938, studied physics in Braunschweig and obtained his Dr.-Ing. degree there in 1972. After that, he joined PTB Braunschweig. From 1977 to 1978, he researched with the later Nobel Prize winner for physics John Hall at JILA in Boulder, Colorado. In 1978, he became the head of the "Unit of Length" laboratory, and in 1989, he took on the leadership of the "Quantum Optics and Unit of Length" department, which he kept until his retirement in 2003.

Tilmann Trebst, who was born in Göttingen in 1968, studied physics in Bonn and Sydney. He worked at PTB from 1995 to 1999 as doctoral degree candidate in Fritz Riehle's group. He obtained his doctoral degree in Hannover in 1999. In 2012, he founded the LifePhotonic company.

Harald Schnatz was born in Nassau an der Lahn in 1957. He studied physics in Mainz and obtained his doctoral degree there in 1986. From 1987 to 1989, he was a scientific staff member at the Institute for Laser Medicine of the University of Düsseldorf. In 1989, he came to PTB Braunschweig, where he worked in the "Units of Length" laboratory and of which he became the head in 2004. Since 2012, he has been the head of the "Quantum Optics and Unit of Length" department.

According to the laws of quantum mechanics, atoms move like waves with a characteristic de Broglie wavelength λ = h/p. Hereby, h is the Planck constant and p is the momentum of the atom. For a velocity of, for example, 700 m/s, λ is on the order of 10 pm. Due to these extremely short wavelengths, very accurate measurements can be made using atomic wave interference.

By using the wave character of calcium atoms, Dr. habil. Fritz Riehle, Dr. Harald Schnatz, Dipl.-Phys. Tilmann Trebst and Dr. Jürgen Helmcke from PTB Braunschweig achieved an optical frequency standard of a performance unattained so far. Thus, they succeeded – with a relative uncertainty of 10-13 – in keeping the frequency and the wavelength of a laser constant and in measuring it. For their work on “Atom interferometry in the time interval for precision measurements” (“Atominterferometrie im Zeitbereich für Präzisionsmessungen”), the four researchers were awarded the 1999 Helmholtz Prize in the field of “Precision Measurement”, which was endowed with 12,000 German marks.

The atomic interferometer developed by Dr. Jürgen Helmcke and his colleagues used single calcium atoms which were cooled with laser light and then trapped in a magneto-optical trap. After the trap had been switched off, such an atom was irradiated with a laser pulse. Thereby, the atom absorbed – with a probability of 50 % – a photon and in doing so, it changed from a ground state into a long-lived excited state. Since the momentum of the atom changed due to the absorption of the photon, the atomic wave packet was split into an excited and a non-excited partial wave, which moved into different directions.

After waiting times of about 100 µs each, the atom was hit by two further laser pulses, which led to the fact that the two partial waves moved towards each other again after the second pulse and interfered with each other at the third pulse. The interference signal was given by the probability that the atom was detected in the excited state, which was determined by its fluorescent light. From the interference signal, the phase difference between the two partial waves could be determined. This difference depended, among other things, on how well the laser was tuned to the excitation frequency of the atom. Due to the fact that the researchers kept the phase difference constant, they were able to stabilize the laser frequency with very high precision.

They estimated the relative uncertainty of the frequency at 2.5 x 10-13. In the course of two and a half years, the measurements of the frequency of the dye laser, which had been stabilized by means of the atomic interferometer, deviated by less than 90 Hz from each other, which corresponded to a relative frequency difference of
10-13. The high frequency stability of such lasers was hoped to be used for ever more precise atomic clocks, while their – correspondingly high – wavelength stability made these lasers the most precise length standards at that time. Since the phase difference between the two interfering partial atomic waves also depended on the acceleration acting on the atoms, the atomic interferometer could also be turned into a highly sensitive sensor for acceleration forces and gravitational forces. Such sensors could be used, for example, to detect crude oil or ore deposits based on the local fluctuations in the Earth's gravitational force.