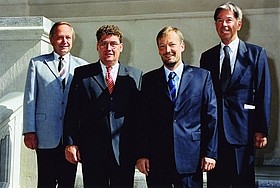 To diagnose diverse diseases of the human heart, it is important to measure the myocardial microcirculation (i.e. the blood circulation in the capillaries of the myocardium) as accurately as possible. For example, reduced capillary density is deemed responsible for cardiac insufficiency after a heart attack. However, there are only very few non-invasive methods with which the microcirculation can be detected that do not represent excessive stress for a patient's heart.

Nuclear-medicine procedures that can be used for a patient only have poor spatial resolution, which limits the quality and reliability of the diagnosis. In contrast to these procedures, nuclear magnetic resonance (NMR) imaging allows the microcirculation in the myocardium to be measured with quantitative and spatial resolution. PD Dr. med. Dr. rer. nat. Wolfgang Rudolf Bauer and his working group "Cardiac Magnetic Resonance Imaging and Biophysics" of the University Hospital Würzburg developed NMR measurement methods that allowed the relative capillary volume, the microcirculation and its share in the total perfusion of the myocardium to be measured. These methods allow, for example, dysfunctions of the coronary vessels to be detected. For his work, Bauer was awarded the 2003 Helmholtz Prize, which was endowed with €15 000.

The methods developed by Bauer and his staff were based on the fact that there is a connection between the parameters of microcirculation and the NMR parameters. The quantities measured locally in the heart by means of NMR imaging were the longitudinal and the transversal relaxation times T1 and T2, respectively, with which the spin-polarized protons in a magnetic field returned to their initial state after a disturbance. If a suitable contrast agent was administered into the cardiac vessels, the proton spins interacted with it and could relax more quickly. Whereas the contrast agent remained present in the vessels, the protons also diffused into the surrounding tissue. Due to the administration of the contrast agent, the relaxation times changed both in the blood vessels and in the myocardium, even if these changes were of different strengths.

As demonstrated by the researchers by means of measurements and biophysical models, there was a connection between the relative intracapillary blood volume (RBV) (which correlates the volume of the capillaries with the total volume of the heart) and the changes in the relaxation times: RBV = Δ(1/T1myocard)/Δ(1/T1blood). In this way, the researchers were able to set up detailed RBV maps of the heart that gave information on the local microcirculation.

Another method did without any contrast agent by exploiting the magnetic properties of the capillaries. When haemoglobin in the capillaries passes its oxygen on to the tissue, paramagnetic deoxyhaemoglobin is formed which reduces the transversal relaxation time T2 of the proton spins. Since the existing amount of deoxyhaemoglobin is proportional to the capillary density, and thus to the relative intracapillary blood volume (RBV), it can be determined based on local measurements of T2. With the aid of these and other methods, Bauer and his staff developed precious diagnostic tools for diverse cardiac diseases.