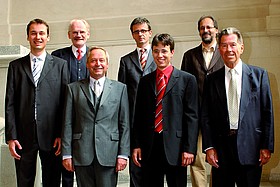 Martin Heumann was born in Vilshofen in 1974. He studied physics in Regensburg and received his doctorate there in 2005. Since then he has been working at a metrological company.

Thomas Uhlig, born in Traunstein in 1975, also studied physics in Regensburg and received his doctoral degree there in 2004. From 2005 to 2016 he worked at the Deutsches Zentrum für Luft- und Raumfahrt (DLR), first as Flight Director of the European Columbus module of the ISS, then as Team Leader for all geostationary satellite projects of the German Space Operations Center. After a short intermezzo at BMW, he has been working as an expert in functional safety at the same company as his fellow Helmholtz Prizewinner since 2018.

Dr. Martin Heumann and Dr. Thomas Uhlig from Prof. Josef Zweck's working group in Regensburg were able to record – with the aid of a modified transmission electron microscope – the shape of hysteresis curves of single magnetic nanoparticles. They were awarded the 2005 Helmholtz Prize for their work entitled "Measurement of hysteresis curves of single magnetic particles in the nanometre range" which resulted from their doctoral theses.

The two young researchers conducted their investigations on disk-shaped nanomagnets made of permalloy, which were 6 to 8 nm thick and had a diameter down to 100 nm. They used an electron hologram to visualize the magnetization pattern in such nanoparticles. To do this, they placed the particle in the electron beam of a specially modified transmission electron microscope so that it was traversed by an electron wave which was then superimposed with a reference wave and was brought to interference. The result was a light-dark pattern with areas of high and low electron beam intensity, the so-called electron hologram, which is essentially an interference pattern.

In this way, the two scientists were able to obtain the magnetic configuration of a nanoparticle with a high spatial resolution of less than 10 nm which had so far been unprecedented. They investigated the magnetization reversal of the nanoparticles by applying an external magnetic field to the particles. When this field reached the so-called switching field, the direction of the magnetization was reversed, as the researchers could see from the microscope images. Thereby, each particle exhibited an individual hysteresis curve which could show several magnetization steps.

Even if two nanomagnets had been manufactured in the same way, their hysteresis curves and their switching fields could differ considerably from each other. One reason for this was that even small deviations in the shape of the nanoparticles have major effects on their magnetic behaviour. Apart from this, Heumann and Uhlig were able to observe the magnetization reversal of a single magnetic domain in very small particles for the very first time. The individual behaviour of nanomagnets must be taken into account if magnetic memories are to be produced on the basis of nanoparticles.