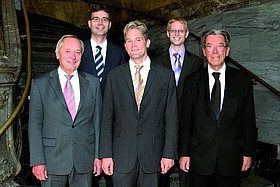 [Translate to Englisch:] Prof. Dr. Ernst O. Göbel (on the left), Ruprecht von Siemens (re.), and the three prizewinners

(From left to right) Tobias Kippenberg was born in Berlin in 1976. He studied physics and electrical engineering in Aachen and then went on to Caltech, where he obtained his doctoral degree in 2004. From 2005 to 2009, he led a young scientists group at the Max Planck Institute for Quantum Optics in T. Hänsch's department. In 2009, he was appointed to the ETH Lausanne (EPFL), where he has been a full professor since 2013.

Ronald Holzwarth, who was born in Stuttgart in 1969, studied physics at the University of Tübingen and at the University of Oregon. After completing his German "Diplom" in physics in Tübingen, he went to the University of Munich to join T. Hänsch, who was the advisor of the doctoral degree he obtained in 2001. Afterwards, he founded Menlo Systems GmbH, of which he is the manager, with T. Hänsch and M. Mei. In addition, he is a group leader at the Max Planck Institute for Quantum Optics.

Pascal Del'Haye was born in Munich in 1982. He studied physics in Aachen and at the University of Munich, where he received his doctoral degree under T. Hänsch. The work that was honoured with a Helmholtz Prize was based on his German "Diplom" thesis and his dissertation, which he completed at the MPI for Quantum Optics. After his time as a postdoc at NIST in Boulder and as a group leader at the National Physical Laboratory in the UK, he is presently leading the Microphotonics research group at the Max Planck Institute for the Science of Light.

Optical frequency combs have revolutionized frequency measurement in visible light and UV radiation. Theodor Hänsch and John Hall were awarded the 2005 Nobel Prize for physics for developing them. Frequency combs allow high frequencies of several hundred THz to be converted into lower, electronically countable MHz frequencies, so that they can be determined very accurately. Frequency combs have replaced the extremely intricate and less accurate frequency chains which were formerly used to bridge large frequency differences. Frequency combs are conventionally generated by means of femtosecond lasers whose light pulses travel through special glass fibres in which nonlinear optical effects considerably enlarge the comb-like frequency spectrum of the laser light. Dr. Tobias J. Kippenberg, Dr. Ronald Holzwarth and Dr. Pascal Del'Haye of the Max Planck Institute of Quantum Optics in Garching developed an alternative way to generate frequency combs. For their work, they were awarded the 2009 Helmholtz Prize, which was endowed with € 20 000.

The three scientists generated optical frequency combs by using microresonators into which continuous laser light was coupled. These mushroom-shaped resonators made of quartz glass were fabricated on a silicon chip. They had an approximately 50 µm "hat" in whose circular boundary whispering-gallery modes were excited by means of an IR laser. In these modes, the laser beam circulated near the edge due to total internal reflection, so that high light intensities occurred in the resonator. This led to optically nonlinear processes in which first two laser photons of the same frequency became two photons with different frequencies. In turn, one of these new photons, together with a laser photon, could then transform into two further photons with new frequencies.

The result was a cascade of photons with a wide spectrum of frequencies and with exactly the same space between them. This formed a wide and very accurate frequency comb whose light was outcoupled from the resonator. Since such a microresonator is very small, the "teeth" of the frequency comb are more widely spaced. As a result of the wider comb spacing, the optical power in the comb spectrum is distributed across fewer optical modes, leading to more power per comb mode compared to conventional frequency combs.

The new frequency combs can be used for applications such as measuring optical frequencies and developing more accurate atomic clocks, but also for generating numerous, exactly defined frequencies for optical telecommunications using optical fibres. Frequency combs have meanwhile been successfully generated with many different arrangements of microresonators, for instance with highly integrated silicon nitride microresonators in which the waveguide and the resonator are integrated on the same substrate. Such systems are excellently suited for practical applications. Tobias Kippenberg's group, together with researchers from Karlsruhe, were thus able to use such frequency combs in telecommunications. The Pentagon's Defense Advanced Research Projects Agency is furthering the elaboration of novel frequency comb generators for use in compact atomic clocks.