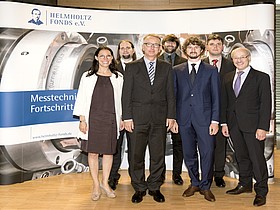 Reinhard Dörner was born in 1961. He studied physics and philosophy in Frankfurt and Aachen. He received his German "Diplom" in physics in 1988 and completed his doctorate in 1991 at Goethe University Frankfurt. From 1995 to 1998, he worked at the Lawrence Berkeley National Laboratory in Berkeley, USA. He received the Feodor Lynen scholarship of the Humboldt Foundation and a habilitation scholarship from the Deutsche Forschungsgesellschaft (DFG). He completed his habilitation at Goethe University Frankfurt in 1998. After that, he was awarded with a Heisenberg scholarship from the DFG. Since 2002, he has been a professor at the Institute for Nuclear Physics of Goethe University Frankfurt. In 2015, he was awarded the Robert Wichard Pohl Prize of the German Physical Society.

Jörg Voigtsberger was born in Frankfurt am Main in 1984. He received his German "Diplom" in physics in 2009 from Goethe University Frankfurt, where he also obtained a doctorate in March 2015. Since June 2015, he has been working at Werth Messtechnik GmbH as an assistant to the head of development and as a project leader for image processing and pre-development.

Stefan Zeller, born in Frankfurt am Main in 1986, achieved his master's degree in physics in 2012 and has been working toward a doctoral degree on the topic of "Ionizing quantum halos with virtual and real photons" since then at Goethe University Frankfurt.

Helium is a noble gas which, according to standard chemistry textbooks, should not form molecules. It has, however, been known for some time that this is not always the case. Reinhard Dörner's research group at the Institute of Nuclear Physics of Goethe University in Frankfurt am Main, Germany, has now succeeded for the first time worldwide in measuring the binding energies of two-atom helium dimers (He2) and three-atom helium trimers (He3) precisely. For their work entitled "Measuring the binding energies of molecular quantum halos with neV accuracy", Maksim Kunitski, Stefan Zeller, Jörg Voigtsberger, Till Jahnke and Reinhard Dörner were awarded the 2016 Helmholtz Prize, which was endowed with € 20 000, in the category of "Precision measurements in fundamental research in the fields of physics, chemistry and medicine".

The bonds between the two helium atoms in He2 only have a ten-millionth of the strength of the bonds in typical molecules such as water or hydrogen. According to the measurements carried out by the prizewinners, the binding energy of the helium dimer amounts to 151.9 ± 13.3 neV and that of the helium trimer (which is a complex of three bound helium atoms) amounts to 236 ± 23 neV. The research team from Frankfurt have furthermore experimentally observed an unusual three-particle Efimov state of the He3 molecule which was already predicted theoretically nearly 40 years ago by Russian researcher Vitaly N. Efimov. In order to measure these extremely weak binding energies, the researchers used a trick: they first destroyed the molecules in a targeted way and then drew conclusions from the fragments as to the binding energy.

The values, which have thus been confirmed experimentally, are of great significance to metrology at low temperatures. This metrology relies on theoretical numerical values of gas properties such as the thermal conductivity, the viscosity and the dielectric properties of helium at temperatures below a few kelvins. The new experiments by the prizewinners now put these theories on a safe experimental basis.