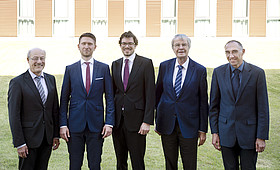 Axel Beyer was born in Sonneberg, Germany in 1986. After completing his Abitur, for which he was awarded the Abitur Prize (Abitur-Preis) of the Deutsche Physikalische Gesellschaft (DPG), he studied physics at Ludwig Maximilians University in Munich. His thesis at the Max Planck Institute of Quantum Optics in Garching, Germany focussed on the precision spectroscopy of atomic hydrogen, which is used to determine the Rydberg constant.
In 2012, he continued this work with the aid of a grant from the Max Planck Society; after receiving his doctoral degree in 2016, he was awarded the Helmholtz Prize in 2018 jointly with his colleague Lothar Maisenbacher for their work titled “The most precise measurement of the Rydberg constant in hydrogen and important hints for solving the proton size puzzle”.

Lothar Maisenbacher was born in Pforzheim, Germany in 1986. He studied physics at Cambridge University and at Ludwig Maximilians University in Munich. In 2014, after completing a research fellowship at UC Berkeley, he began his doctoral work at the Max Planck Institute of Quantum Optics in the group headed by Thomas Udem and Theodor W. Hänsch.

Dr. Axel Beyer and Lothar Maisenbacher from the Max Planck Institute of Quantum Optics have provided extremely exact measurements of a transition frequency in the hydrogen atom, which constitute important information for solving the “proton size puzzle” of quantum electrodynamics; for this work, they received the 2018 Helmholtz Prize in the category of “fundamental research”. They repeated previous experiments with markedly higher accuracy. These measurements were preceded by several years of laboratory work in which the two prizewinners developed new models, researched systematic effects which had not previously been considered and improved their test setup. The result was that their measurements, which were taken using conventional hydrogen, confirmed measurements taken using muonic hydrogen, thus harmonizing quantum electrodynamics with the experimental observations.

The background of their research is as follows: quantum electrodynamics, or QED for short, describes how material particles (such as atoms) interact with light; furthermore, QED is considered to be exceptionally well established. Many findings are based on the exact investigation of the hydrogen atom. Since this atom consists of only one proton and one electron, it is the atom that can be best described mathematically. However, a few years ago, measurements taken using muonic hydrogen shattered previous theories about the makeup of the atom. Muonic hydrogen is generated by replacing the electron circling the nucleus with a muon. The muon is also negatively charged, but is much heavier than an electron. In this experiment, the radius of the proton (i.e., the radius of the atomic nucleus) suddenly appeared to be noticeably smaller than in previous measurements with conventional hydrogen. This set off a lively debate among researchers concerning this “proton size puzzle”: had a measurement error taken place? Or did the findings indicate that fundamental gaps existed in the understanding of the theory of quantum electrodynamics, which until then had been considered well understood? Via the new findings of the Helmholtz prizewinners, which were published in Science magazine, the information which became available in this debate indicated that an error had taken place in previous measurements.