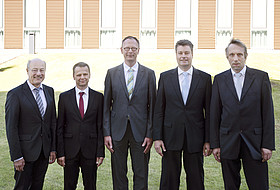 Dietmar Drung was born in Mühlacker, Germany in 1958. Following his studies in electrical engineering, he obtained his doctorate at the University of Karlsruhe. In 1988, he took up a position at the Physikalisch-Technische Bundesanstalt (PTB) in Berlin where, since 2009, he has held the position of Senior Scientist and developed high-sensitivity measurement systems used in metrological applications.

Martin Götz was born in Erfurt, Germany in 1968. Following his studies in physics, he obtained his doctorate at the University of Jena in 1997. In 1999, he joined the Physikalisch-Technische Bundesanstalt (PTB), where he has worked in the Electrical Quantum Metrology Department since 2005. Since 2017, he has been a lecturer at the Technische Universität Braunschweig. He was awarded the 2018 Helmholtz Prize in the category of “Applied Metrology” jointly with three of his colleagues.

Hansjörg Scherer was born in Kirchen (Sieg), Germany in 1965. Following his studies in physics at TU Braunschweig, he began writing his doctoral thesis at the Physikalisch-Technische Bundesanstalt (PTB) in 1992 as the recipient of a grant from the Metrology in Physics and Technology research training group of the DFG (German Research Foundation); he received his doctorate in 1995 from TU Braunschweig. Since that time, his work at PTB has been in the field of electrical quantum metrology. For his work on the development of new procedures for the traceable measurement and generation of small electric currents, he received the 2018 Helmholtz Prize.

Eckart Pesel was born in Uelzen, Lower Saxony, Germany in 1960. Following an apprenticeship as a radio and television technician and a university studies course at the Ostfalia University of Applied Sciences in Wolfenbüttel, he joined the Quantum Metrology Department of the Physikalisch-Technische Bundesanstalt (PTB) in 1990.

A special focal point of his work is the manufacture and operation of cryogenic current comparators, which are used for extremely precise resistance and current measurements. In 2018, he was jointly awarded the Helmholtz Prize with three of his colleagues in the category of “Applied Metrology”.

The 2018 Helmholtz Prize in the category of “Applied Metrology” was awarded to a team of researchers from the Physikalisch-Technische Bundesanstalt: Dr. Dietmar Drung, Dr. Martin Götz, Eckart Pesel and Dr. Hansjörg Scherer. Working at the interface between research and practical application, these four scientists have succeeded in developing both methods and instruments that have brought about groundbreaking improvements in the traceable, high-precision measurement and generation of small electrical currents.

Specifically, their project concerns the development of a novel current amplifier, the Ultrastable Low-Noise Current Amplifier (ULCA), and its associated current comparator, which enables the traceable and highly accurate calibration of the ULCA. The characteristics of the ULCA are nothing short of revolutionary: although it is small and portable, it can be used to measure currents with outstanding accuracy (relative uncertainty of 10-7 for a 100 pA current). It can also be used as a reference current source for small electric currents at national metrology institutes – in other words, at the highest metrological level.

These new procedures and devices have improved and expanded calibration and measurement capabilities – for example, those in the semiconductor industry, in environmental measurement technology, in DNA sequencing and in quantum communication. In current research, they are being used in single-electron circuits for the future quantum-based realization of the unit of electric current, the ampere. The ULCA is licenced by PTB and is already being used by a small German enterprise. Clients who have used the ULCA to date include national metrology institutes in the United States, Asia and Europe as well as German calibration laboratories.