The 2020 Helmholtz Prize for Precision Measurements in Fundamental Research

Dr. Christian Sanner (PTB, currently working at JILA in Boulder, CO, USA), Dr. Nils Huntemann and Richard Lange (both from PTB) for their work titled “Single-atom spectroscopy with eighteen-digit accuracy to measure the symmetry of space-time” 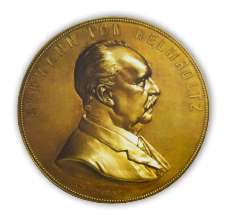 The team from PTB has addressed a fundamental question of physics. One of the basic assumptions of Einstein’s special theory of relativity is that the speed of light is always the same, independent of its direction of propagation. Now we may ask ourselves: How universal is this symmetry of space, also known as Lorentz symmetry? Does it apply equally to the motion of particles of matter like electrons, or are there any directions along which these particles move faster or more slowly at the same energy? In particular, for high energies of the particles, theoretical models of quantum gravitation predict a violation of Lorentz symmetry. These models are designed to provide a unified description of the smallest (i.e. the quantum) world, with gravity that we typically observe between celestial bodies. Optical spectroscopy of atomic transitions, which is the study of the interaction between light and atoms, offers a unique level of precision. This enables stringent tests of the fundamental assumptions and predictions of the theory of relativity. In 2016, PTB physicists presented a clock based on the interaction of high-precision laser light with a single Yb+ atom and achieved a relative accuracy of 3 × 10-18. If this clock had started ticking at the time of the Big Bang (13.7 billion years ago), it would now be one second out of sync. Two versions of this optical Yb+ clock in different spatial orientations are being used to test Lorentz symmetry with unprecedented accuracy.

In a universe that obeys the laws of Lorentz symmetry (as assumed in the theory of relativity), a physical experiment must always yield the same result, independent of its orientation in space or its uniform motion. But can we be sure that this symmetry is maintained up to the limits of what Yb+ clocks can measure? Building on the tradition of the Michelson-Morley experiments, first performed more than 100 years ago, Christian Sanner, Nils Huntemann and Richard Lange succeeded in improving the limits for a violation of Lorentz symmetry for electrons by two orders of magnitude. As a “side-effect” (but an important one), their long-term comparison has confirmed the extremely small systematic uncertainty of the two optical Yb+ clocks, which amounts to less than 4 × 10-18. The results were published in Nature.